Colorado man charged in 1989 murder of one Arizona woman, rape of another

MESA, Ariz. — A Colorado man has been arrested and charged in the brutal 1989 rape and murder of an Arizona woman, as well as a rape that happened just a year later in the same apartment complex.

Thomas David Cox, 58, of Colorado Springs, faces a total of 16 charges, including first-degree murder, kidnapping, aggravated assault and multiple counts of sexual assault. He was arrested Saturday at Phoenix Sky Harbor Airport, according to KTVK in Phoenix.

Cox is accused of raping and killing Susan Amy Morse, 22, in her apartment in October 1989. He is also accused of returning to the housing complex in November 1990 and raping a 23-year-old woman who lived there, according to authorities.

The second woman, whose name is being withheld to protect her identity, survived.

Cox, who was identified through DNA evidence and fingerprint analysis, was extradited to Arizona to face the charges, according to The Associated Press. He is being held in lieu of $1 million cash bond.

A string of tragedies

In the spring of 1980, William and Tillie Morse lost their 11-year-old daughter, April Marie Morse, when the car she was traveling in was struck by a drunk driver. The Arizona Republic reported that the Mesa couple tried to work through their grief and focus on their remaining daughter, Susan Morse, who was a couple of years older than her sister.

By October 1989, the family had forged forward. Susan Morse, then 22, had recently gotten divorced and moved into a new apartment. She often biked to her job at Lamco II, a Tempe graphics firm where she worked as a quality-assurance inspector.

She spoke to her father the week of Oct. 8, telling him she was happy with the direction her future was heading.

“I remember the conversation so well,” William Morse told the Republic. “She said she was high on life.” 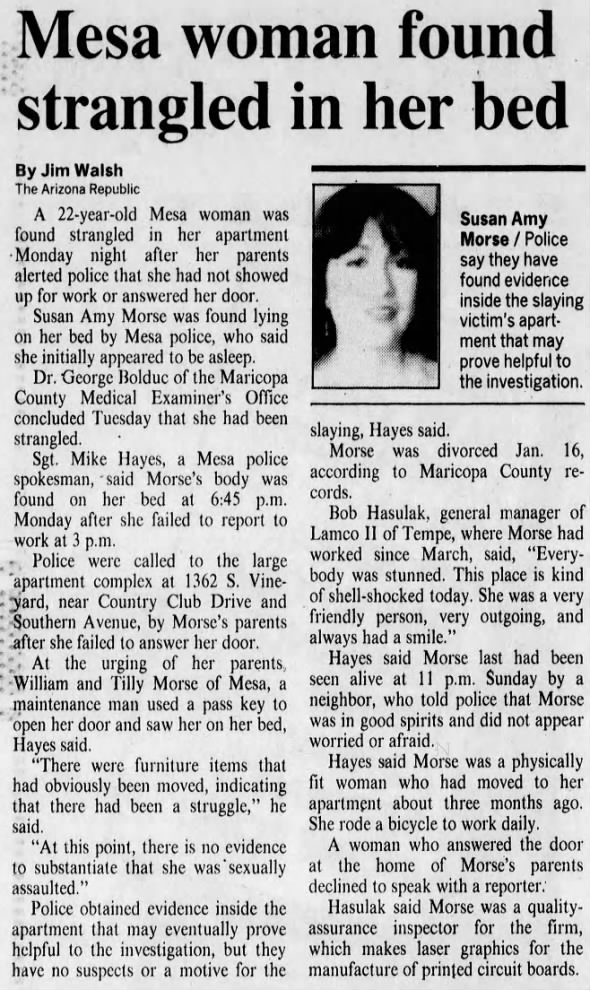 Susan Morse’s life, and those of her parents, came crashing down the afternoon of Oct. 16 when she failed to show up for her afternoon shift at work. According to the newspaper, Morse’s parents alerted the staff at the complex, and a maintenance man unlocked the door of her apartment.

Inside, Morse lay dead on her bed. She had been sexually assaulted and strangled, the Republic reported.

“There were furniture items that had obviously been moved, indicating that there had been a struggle,” Mesa police Sgt. Mike Hayes said at the time.

There were no signs of forced entry, which indicated that Morse may have known her killer. In the aftermath of the murder, however, police had no definitive suspects in the case.

Detectives said evidence was found in her home that could eventually aid the investigation, but the case soon grew cold.

William Morse described the pain of losing his daughter in September 1990, just days before the first anniversary of her slaying.

“Sometimes, the only thing that keeps me going is knowing my daughters are not going through what my wife and I have had to endure,” Morse told the Republic.

He said it was difficult to talk about the young woman, who was described as an artistic soul who liked painting and sewing. Growing up, she had stayed out of trouble, and from all indications, the same was true during her brief adulthood.

“She was very pretty and likeable, a reserved young woman who had a zest for life,” Mesa police Sgt. George Felder said.

William Morse said that he decided to speak of his daughter’s death solely to ensure her killer was caught.

“If I did not want the killer found, I wouldn’t talk,” he told the Republic. “It hurts too much.

“Nobody’s daughter is safe until this guy is caught.”

The grieving father’s words proved to be prophetic two months later, on Nov. 13, 1990, when a second woman was sexually assaulted at the same apartment complex.

In November 2002, nearly 12 years after the second assault, authorities learned that the DNA from both victims’ bodies was from the same man.

The rapist and killer’s DNA was entered into the FBI’s Combined DNA Index System, or CODIS, with no results. In addition, authorities in 2015 attempted to use familial DNA testing to see if any of the man’s relatives had their DNA in the system, but that, too, produced no results.

Then came genetic genealogy, which has helped law enforcement agencies solve a multitude of long-cold cases across the country. Mesa cold case detectives reached out to Bode Technology, one of a number of private forensic companies that aid in the unsolved cases.

A genetic profile was created using the DNA left at the crime scenes, and a family tree was built for the alleged killer.

“Additional investigative genealogy work was recently done by the FBI,” the police statement read. “A family line was developed and DNA was collected via surreptitious collection from … a potential subject or relative to the subject.

That man’s DNA was compared to that of the suspected killer, and there was no match.

Bode is honored to have assisted @MesaPD in identifying the suspect from the homicide of Susan Morse after almost 30 years. #coldcase #DNA https://t.co/sumJHPAg7S

Through additional research and investigation, however, Thomas Cox was identified as a possible suspect.

“A plan was put in place with the FBI to obtain a surreptitious sample from Thomas if located in Colorado,” the statement read. “Prior to this happening a 10-print card and palm prints were located for Thomas from misdemeanor offenses from the late 80s (and) early 90s.”

Cox’s fingerprints matched those found at the scene of the 1990 rape, authorities said. The fingerprints tie him to that crime, and the DNA match between the two crimes ties him to the Susan Morse homicide.

Both cases remain under investigation.

In a statement obtained by ABC 15 in Phoenix, FBI officials said they are always available and willing to assist local law enforcement agencies get “bad actors” off the streets.

“This case exemplifies that the passage of time does not deter law enforcement’s persistence for truth and justice,” the statement read. “The FBI’s Phoenix field office values our exceptional partnerships with local law enforcement, and we are grateful for the leadership of the Mesa Police Department in these cases.

“The results of this cooperative effort will provide the victims and their families the long-awaited justice they deserve.”

Roland Brown, who heads the Mesa Police Department’s cold case unit, told KTVK that nothing is more rewarding than telling a victim’s family an arrest has been made in an unsolved crime.

“When you go to a family and tell the family we made an arrest and we’re pretty confident the person arrested is responsible for your loved one’s death, it’s the greatest feeling,” Brown said.

Unfortunately, neither William Morse nor his wife lived to see the arrest of their daughter’s alleged killer. Online records indicate that William Morse died in 1989, 10 years after the murder.

Hits 97.3 Takes Pride in Our Community

Download the HITS 97.3 App on your Android or Apple device!

Everything you love about hits973.com and more! Tap on any of the buttons below to download our app.

Enable our Skill today to listen live at home on your Alexa Devices!

You may be offline. Please check your connection and try again using the Retry button.